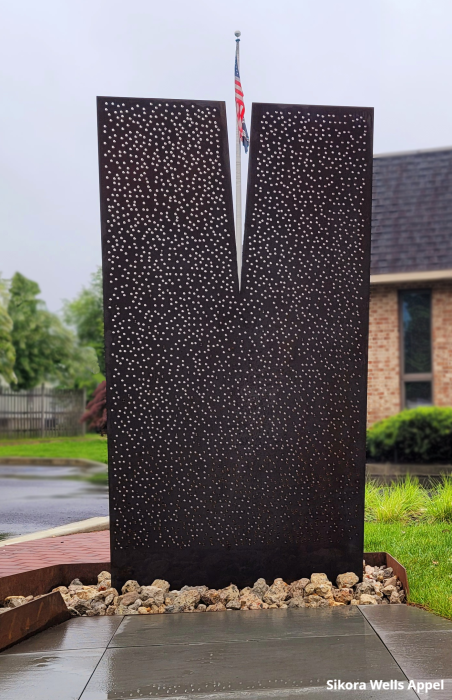 Finished sculpture with American flag visible in the background.

We are honored to have played an important part in the creation of this new 911 Memorial Monument in Barrington, New Jersey. With another anniversary of the tragic attacks on our nation only a few days away, we thought we would take the time to share this story with you.

The monument is a thick slab of weathered steel protruding from the earth; its top edge cloven with a sharp gash and its surface perforated with 2,977 holes—exactly the amount of people who lost their lives in the terrorist attacks on September 11, 2001. The placement of the plate, the angle of its tilt, and the angles of the holes cut through the plate are all precisely planned and calculated. On the exact date and time of each of the four attacks, the sun aligns perfectly with the holes representing the people who lost their lives in that attack. In the dark shadow cast by the plate, thousands of tiny spots of light defy the darkness. And even as the sun advances in the sky and more spots of light come into focus, the long arm of shadow stretching out from the plate grows shorter and shorter until it is finally gone. Such is the fate of shadows when they are pierced by many lights.

Simulation of the sculpture.

The credit for this project goes to many businesses and people, foremost among them being Sikora Wells Appel, the landscape architecture firm that designed the memorial garden and the sculpture. We take our hats off to Joe Sikora. He was the painter, and we were his brush.

This project was started already in the fall of 2021. The original vision was to have it done in time for a 20th anniversary opening ceremony. Unfortunately, this was not possible. Instead, we were able to fabricate the plate without the holes and have it installed at the site in time for the ceremony. In the spring of this year, the sculpture was taken back down and put up on our waterjet again for the big job of cutting in all the holes. The holes are cut through the plate at angles, so our 5-axis waterjets are a great tool for a job like this! 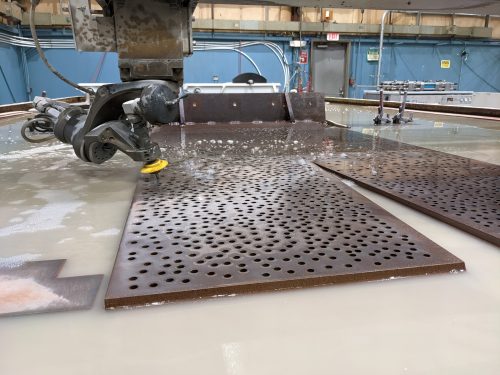 The holes being cut with one of our 5-axis waterjets.

It is always a bit stressful to put this much time into a single plate, but the job went smoothly and turned out perfectly! We are very thankful to Sikora Wells Appel and to the Borough of Barrington, New Jersey for giving us the opportunity to be involved in the creation of this beautiful and meaningful monument.