How Does a Waterjet Cut?

The environment inside a waterjet is from a different planet. We’ve gotta get out of our box to get a grip on the physics involved. Ready to jump in?

A waterjet pump pressurizes the water to 90,000 psi and compresses it about 14%. You read that right—although we commonly hear that water can’t be compressed, that only means that it can’t be compressed significantly in common systems like pressure washers. The 90,000 psi, 100 hp waterjet pump takes in 1.4 gallons of water per minute, squeezes that water to a volume that is 14% smaller, and outputs about 1.2 gallons of water per minute. This compression makes the water warm.

This dense water that is pressurized to 90,000 psi flows through high-pressure tubing to the cutting head. Here it is released through the waterjet orifice, which is a hole in a hard gemstone (a diamond, ruby, or sapphire). This hole is smaller than a pinhole—0.015” diameter.

As the water escapes through the orifice, it experiences extreme g-forces, accelerating to 2,500 mph in a few thousandths of an inch. This is Mach 3.3, which is similar to the speed of the fastest bullets. To visualize what’s going on here, note that we’ve got almost 100 horsepower flowing through a hole smaller than a pinhole! And now the water is ready to get acquainted with the abrasive. 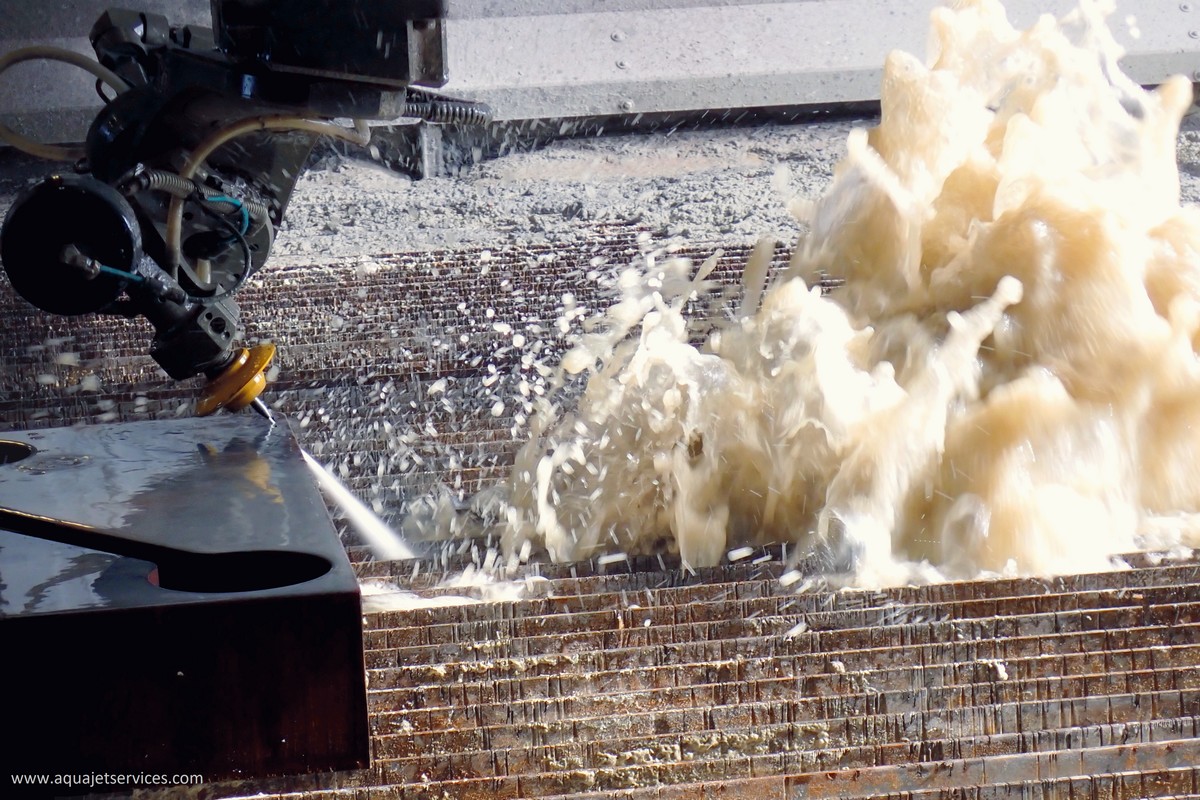 A waterjet stream cuts with a velocity of Mach 3.

The supersonic stream of water draws in small grains of “sand” and takes it on a ride that destroys it. This “sand” is commonly 80-mesh garnet, and it is this garnet that does the cutting. Garnet is a red gemstone that is used as an abrasive in premium sandpaper, sandblasting, and of course waterjet cutting. If cutting ultra-hard materials like some ceramics, specialized abrasives such as aluminum oxide and silicon carbide can be used. However, they are only used for extreme situations because they increase nozzle wear by about 100 times. 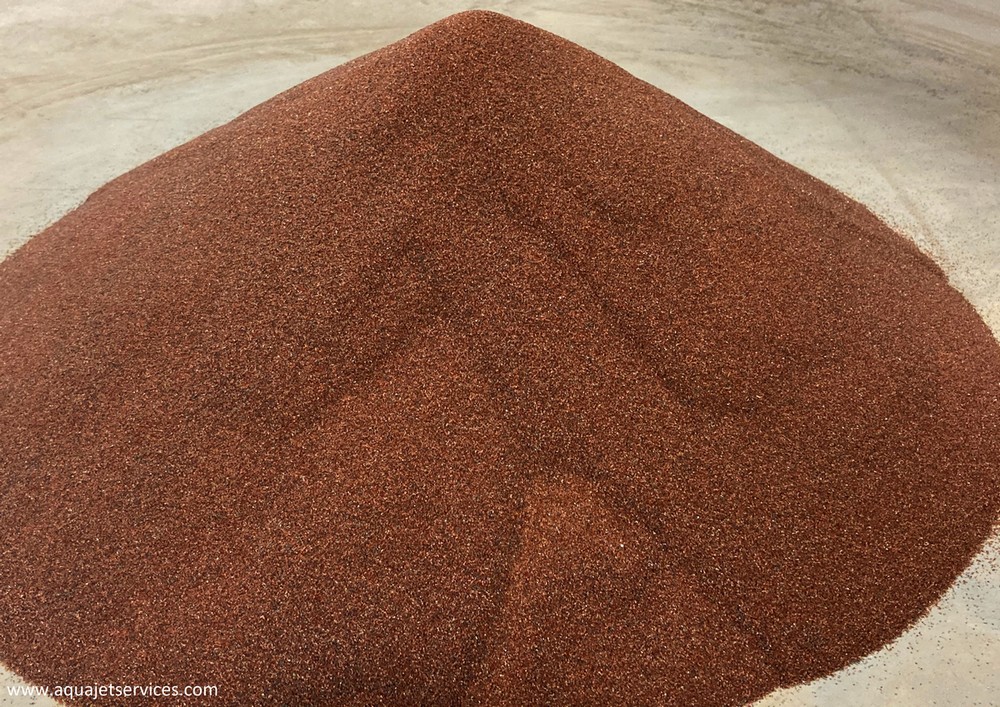 The vast majority of waterjet cutting is done with garnet, and it comes in two types.

Alluvial garnet is found in beaches and in river sandbars. It is separated from the beach sand and screened to appropriate sizes. Most alluvial garnet comes from deposits in Australia and India. 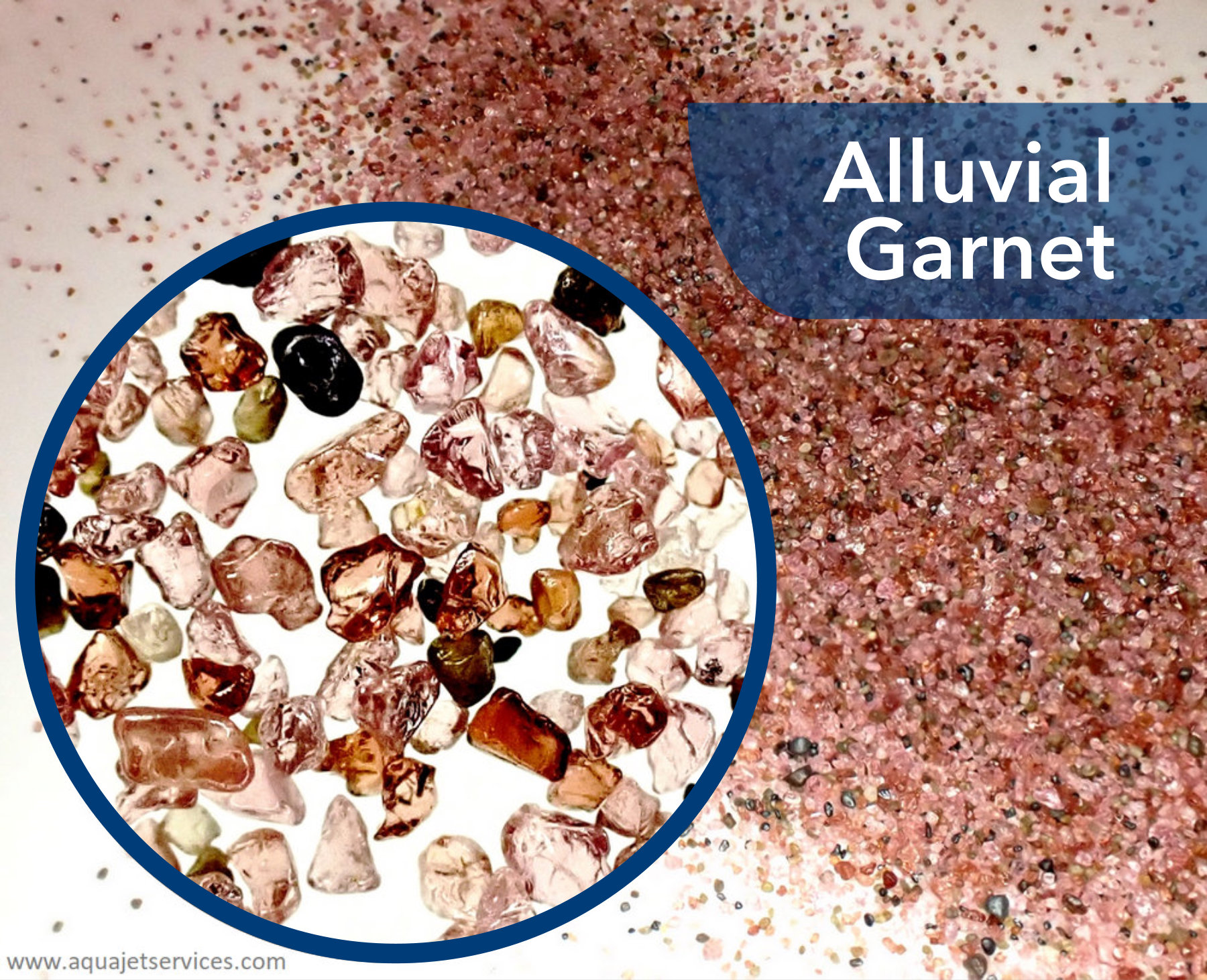 Crushed garnet, also known as hard rock garnet, is mined from rock formations. The garnet is crushed and screened to appropriate sizes. Then it is cleaned to remove dust. Most crushed garnet comes from the USA. 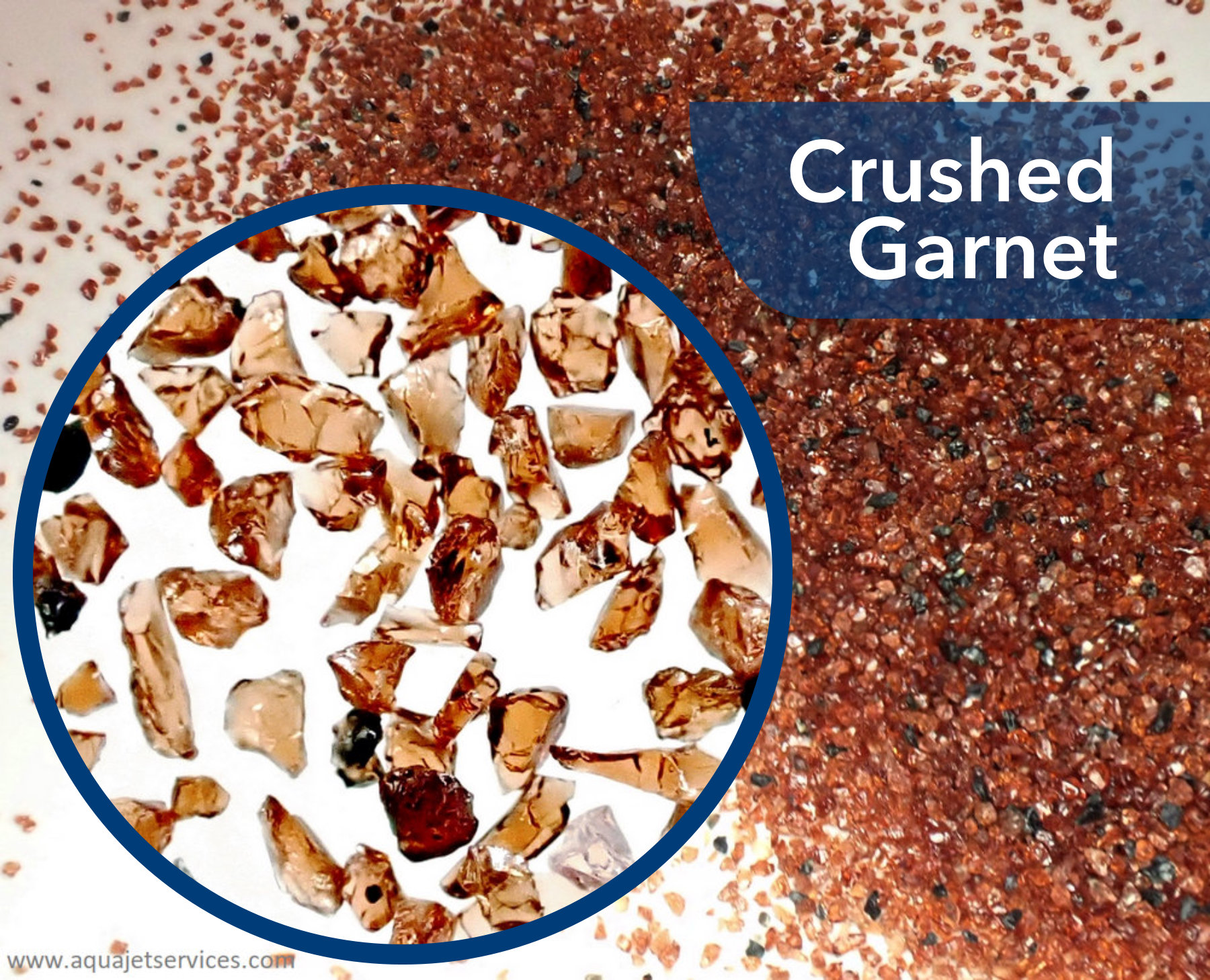 Comparison Between Alluvial and Crushed Garnet.

Alluvial garnet is cheaper than crushed garnet because it is more abundant and does not require crushing. However, it has been smoothed by natural erosion, making rounded shapes. Crushed garnet cuts faster with its angular, sharp shapes.

Now that we’ve covered the abrasive, let’s get back to the high-velocity water that is leaving the waterjet orifice. It’s on a wild ride at Mach 3.3 to mayhem in 5 inches, but a lot happens during that moment of panic.

As we said, grains of abrasive are being drawn into this supersonic stream by a venturi effect. All of the cutting head components from the orifice down through the mixing tube must be precisely aligned so that the combined water/abrasive stream is coherent. Remember that this finished waterjet stream has the power to cut through steel over a foot thick, so it destroys anything in its path if it misbehaves.

The water accelerates the abrasive as it blasts through a 4” long tungsten tube. This mixing tube, which can be called the waterjet nozzle, is the gun barrel where the abrasive is accelerated. If we would be able to watch what’s happening inside that tube, we would see microscopic droplets of supersonic rain flashing past, with lumbering boulders of garnet tumbling into their flight path. 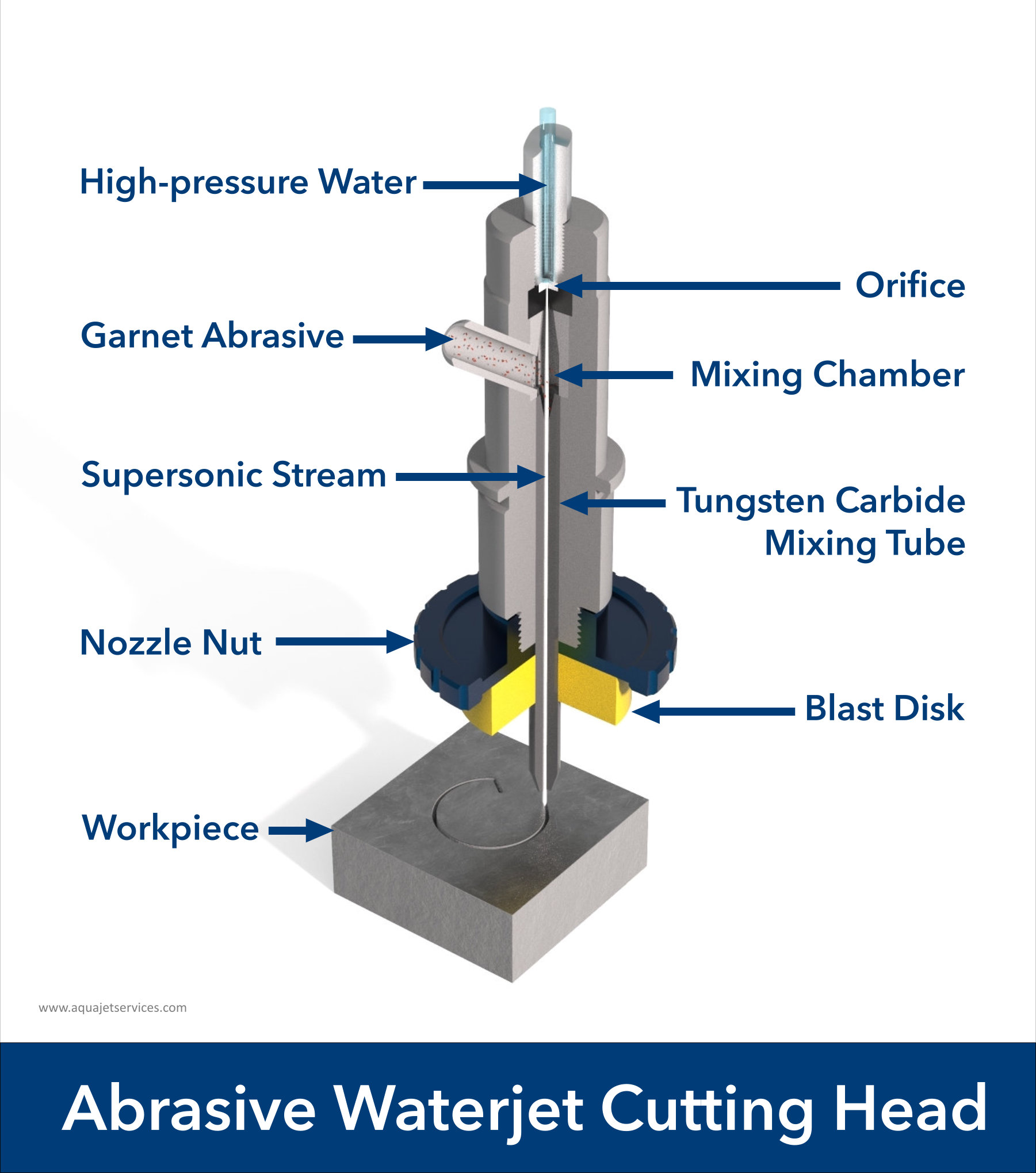 As the supersonic water droplets collide with these grains of garnet, the garnet gets kicked harder than a bullet in a gun, accelerating to 3,300 fps in 4 inches. This bizarre hailstorm is mostly empty space—the water and abrasive fill only 12% of the volume of the stream. There are about 10 grains of garnet per inch of stream coming out of the waterjet nozzle.

As the stream breaks out into daylight, we see a white, sharply-defined cylinder that is a millimeter wide. Its speed has dropped below Mach 3 because it has accelerated the abrasive. The waterjet stream exits the tube about 0.100” away from the material it’s cutting, so the end is near. 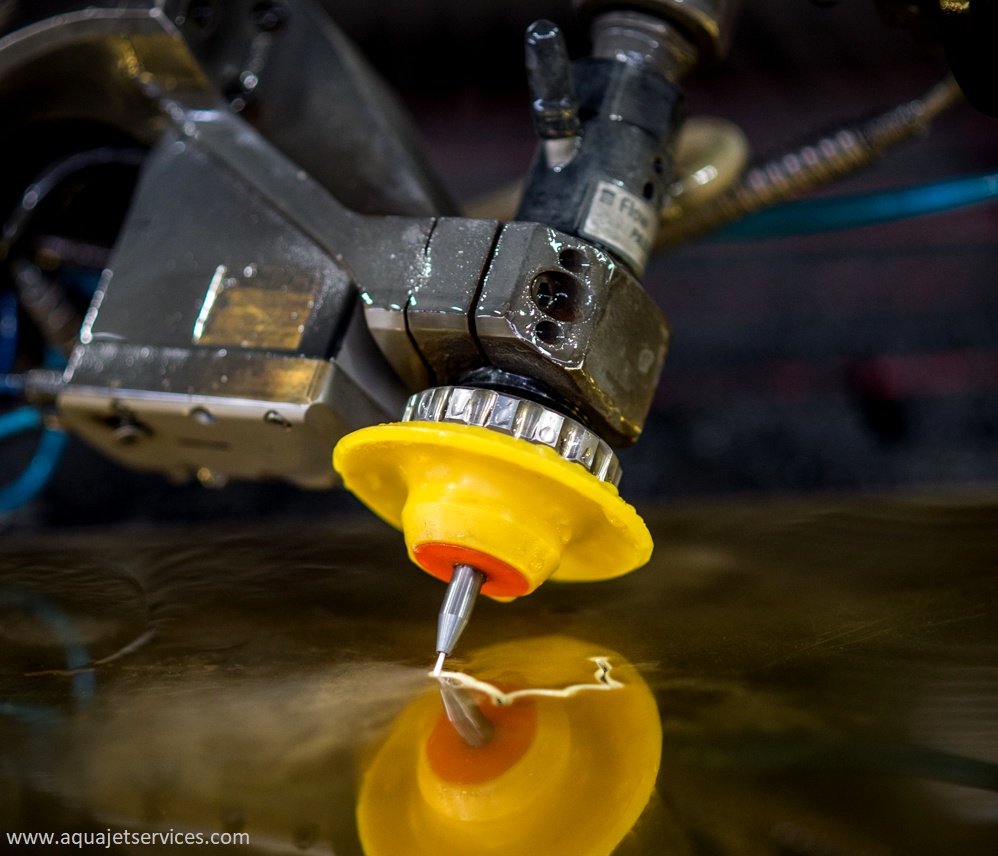 A waterjet stream can look tame, but it has the power to cut metal plates over a foot thick.

Now for the impact! Not all of the particles of garnet are smashed to muck at the same moment. Some are obliterated on the top surface of the material, while others cruise down into the cut made by their predecessors before being annihilated inside the material.

Because the cutting head is moving laterally as it cuts the material, one side of the supersonic stream is the leading side and the opposite side is the trailing side. The grains of garnet on the leading edge are shattered and crushed in the upper level of the material, while the grains in the center and trailing edge come smashing down upon them. The stream trails back slightly as all of its power enters the maelstrom. Now every grain of garnet and every droplet of water is in play, and even the material from the upper level of the cut enters into the carnage.

A waterjet cutting 2” thick clear acrylic. This is a fast cut with a rough cut quality to accentuate the stream dynamics.

Let’s focus on the forces at work inside this cut. In some ways, it is similar to the mechanical shearing action of the cutters of a mill or a saw blade, but there are some significant differences due to the radically different velocities. Those mechanical methods use metal cutters that cut at hundreds of surface feet per minute (SFM), but waterjets use tiny grains of rock that are moving 1,000 times faster. Heat requires time to transfer, which you demonstrate when you tap your finger on a hot piece of metal to feel whether it is too hot to touch. The particles inside a waterjet cut are moving so fast that they clip off material and are gone before the heat from their impact transfers to the cut face.

Furthermore, a waterjet leaves a cut surface that is quite unaffected by mechanical stresses. It is remarkable how little force is transferred to the workpiece by the waterjet stream—a 100 hp, 90,000 psi waterjet stream applies less than 5 pounds of downforce to the workpiece while cutting it. Even that small transfer of downforce happens mostly at the leading edge of the cut, which is removed during the cut. That is why waterjets do not work-harden metals. This makes them an excellent choice for cutting titanium and Inconel.

In fact, the cut interface of the supersonic waterjet stream is cold enough to cut a bimetal strip without warping it, and gentle enough to cut ceramic as thin as an eggshell without breaking it. Incredibly, this same gentle tool has the power to cut through superalloys over a foot thick.

Now the stream has left the material, but what’s going to stop it? The answer is a 3-foot-deep tank of water called the catcher tank. The stream is still moving fast, and its energy is shed into the water through violent stirring action. Absorbing the stream’s kinetic energy can heat the water in the tank far above the temperature of the water coming out of the waterjet! The cutting stream has so much power that it can cut through the steel tank floor when cutting thick plates despite the water in the tank.

A supersonic waterjet stream entering the water-filled catcher tank. The shock wave from the stream stirs up the sediment on the bottom of the tank.

As the stream disperses, the spent abrasive settles to the bottom of the tank and is collected in an abrasive removal system. It would be nice if the abrasive could be washed, dried, sifted, and reused. However, most of the abrasive has been pulverized in the cut, so it cannot be recycled. The good news is that garnet is just rock, so disposal isn’t a problem unless something hazardous was cut.

Typically, a waterjet pierces through the material in the scrap area a short distance from the cut line, and then cuts to the line to begin the profile. After cutting the profile, a short lead-out can be beneficial to erase the witness mark of the lead-in. A calibrated waterjet with taper compensation can cut profiles without making a nib or a notch at the lead-in/lead-out. Often, neither a trained eye nor a caliper can locate the lead in/lead out. 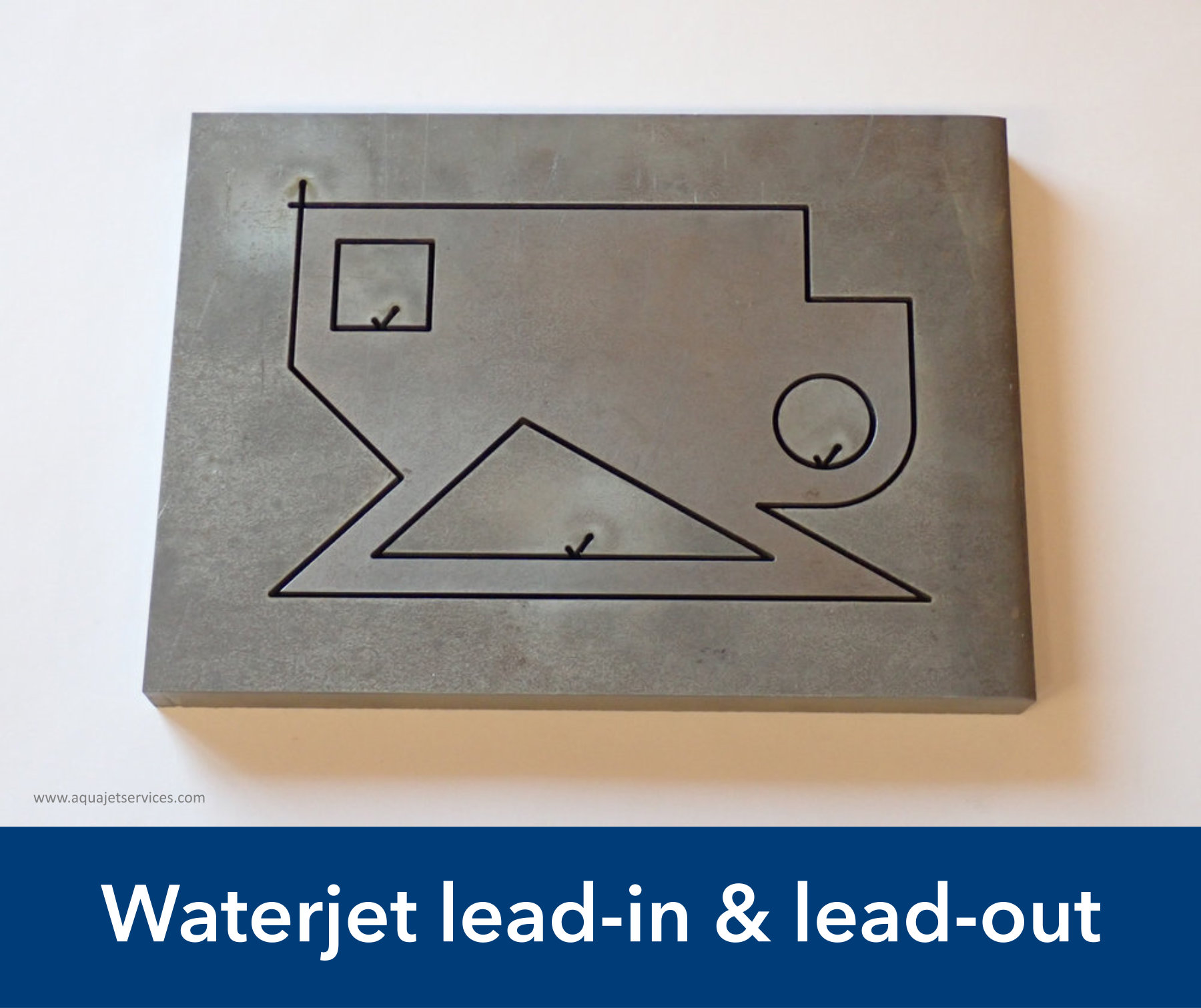 A waterjet pierces through the material in the scrap area and cuts a lead-in line to begin the cutting profile. At the end of the cut, a lead-out line is often used to erase the witness mark.

This is the quick way to pierce through the material. There’s a roar and a cloud of steam as water cruising at Mach 3 tries to kill itself on the material, and then the stream is through! (Random fact: During the pierce, 3.3 ounces per second of water and abrasive traveling about Mach 3 colliding with a stationary plate produces a sustained downforce of 22 pounds.) The high-pressure pierce is too aggressive for laminates, glass, or stone. In these conditions, the powerful stream can either break or delaminate the material. 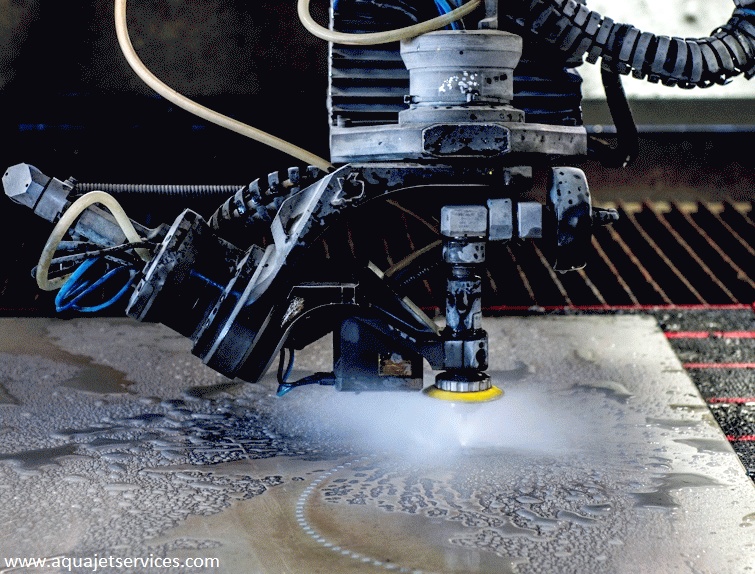 A high-speed photo showing the moment the waterjet stream impacts a steel plate for a high-pressure pierce.

A waterjet reduces its pressure to pierce fragile materials like laminates, glass, and stone. First, abrasive is drawn into the mixing chamber, and then low-pressure water (about 15,000 psi) is turned on. The presence of the abrasive along with the lower waterjet velocity dampen the initial impact, and the pierce is completed using this low-pressure setting. This prevents both breakage and delamination. After the fragile material has been pierced, it can be cut with high-pressure water. Therefore, the waterjet pumps up to its usual operating pressure to do the cut.

A waterjet doing a low-pressure pierce in 2” thick clear acrylic. This video clip is shown at 10X speed.