Comparison Between Waterjet Cutting and Other Cutting Methods 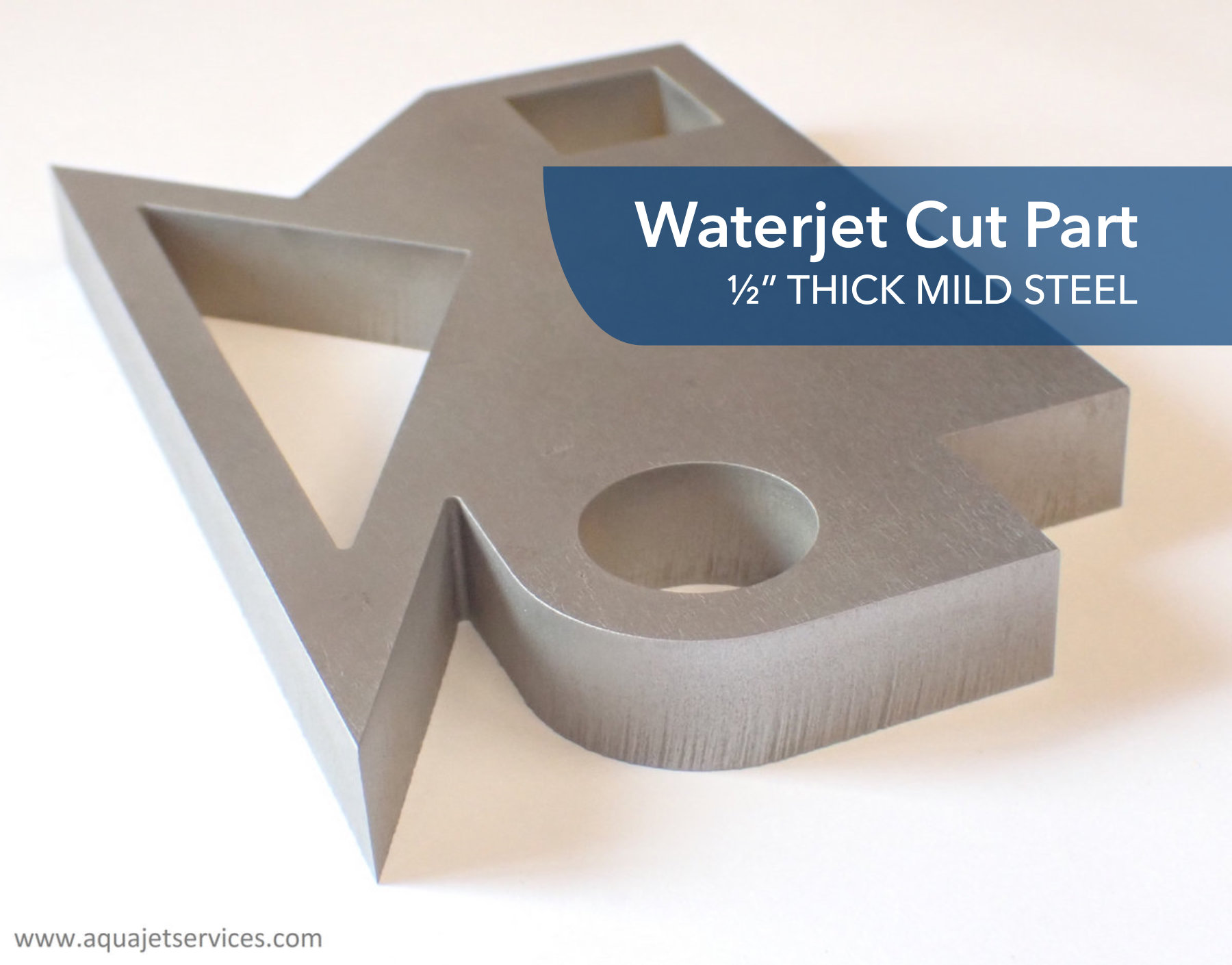 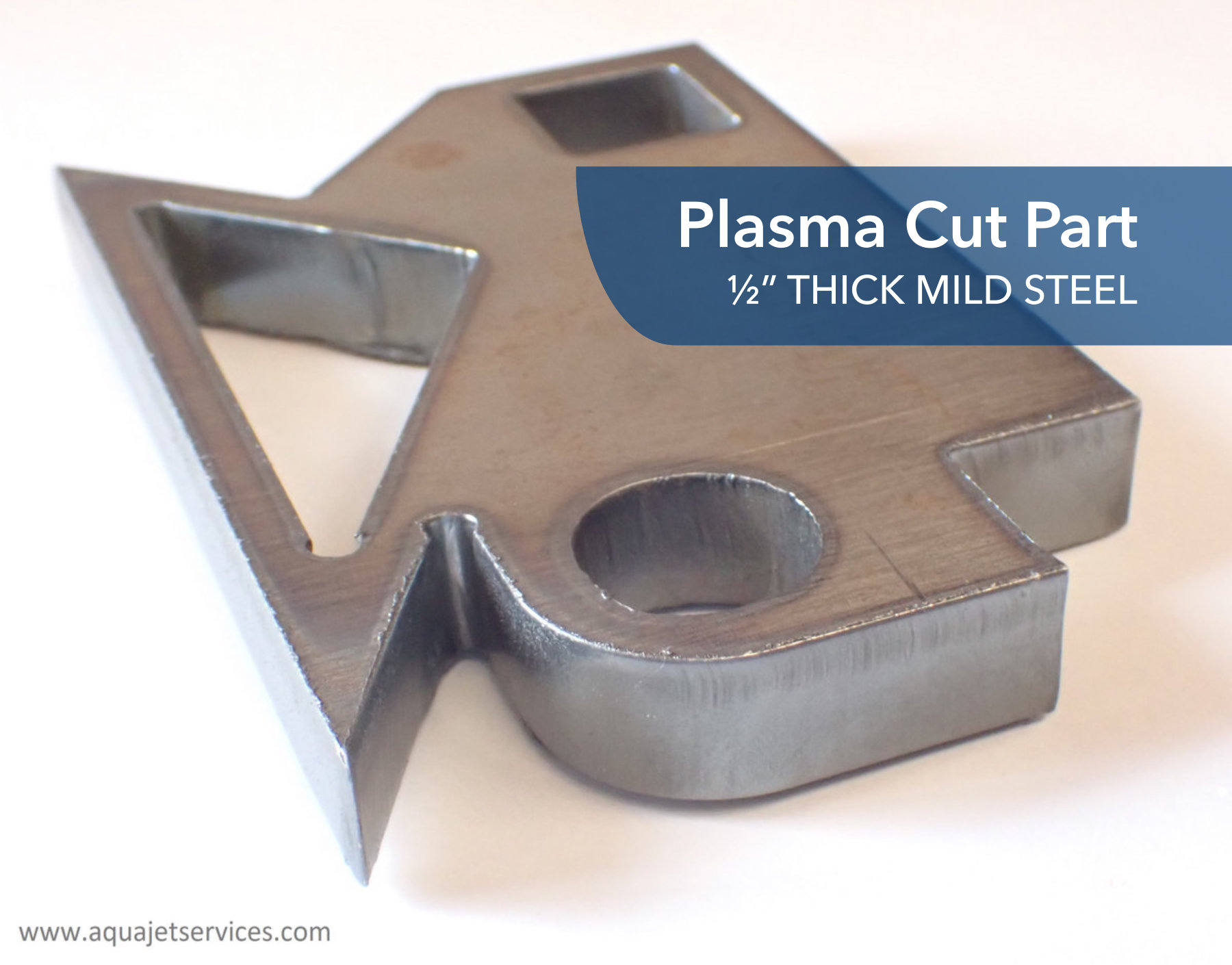 Plasma cutting uses super-hot gases that are electrically charged to burn through conductive metals. A plasma is a gas that has free electrons due to its energized state, making that gas conductive. Stars are made of this conductive plasma, which is why the sun’s top layer gets all loopy from magnetism.

Plasma cutting is cheap and fast, and it can cut metals in thicknesses up to several inches. For cutting rough shapes in metal, it’s hard to beat the price of plasma.

However, plasma cutting is confined to metals, and its heat affected zone (HAZ) is a serious side effect. Warping from the heat is a common problem, as well as the melting of intricate geometry. Plasma cutting produces noxious gases, and it leaves slag on the cut surface. It is less accurate than waterjet, being suitable for rough cutting only. Plasmas cannot cut hole diameters much less than the thickness of the material, whereas waterjets can cut hole diameters 5 times less than the thickness of the material. Also, plasma cutting doesn’t permit cutting stacked sheets.

Flame cutting, also known as oxy-fuel cutting, is the rougher brother of plasma cutting—it uses fire to burn out shapes in metals. It has more limitations than plasma, such as its inability to cut nonferrous metals. But it can cut thicker plates than a plasma cutter can. In fact, a suitably configure oxy-fuel torch can cut steel plates over a foot thick, which is similar to waterjet cutting. The minimum diameter of a burned hole is about 75% of the thickness of the plate, whereas waterjets can cut a hole diameter that is 20% of the thickness of the plate. Waterjets have all the same advantages over torch cutting as they do over plasma cutting. 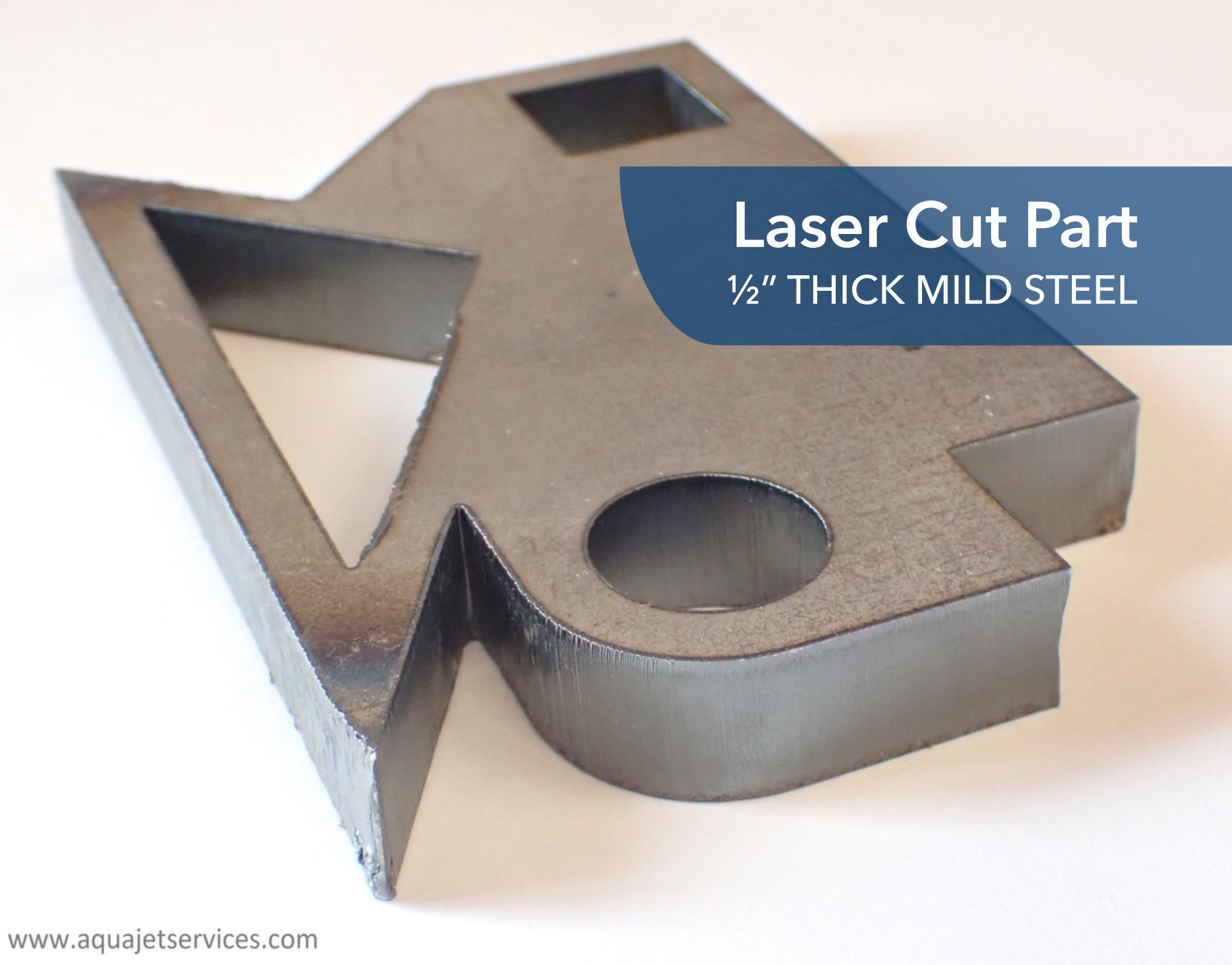 Laser cutting uses a laser beam that is assisted by a gas to cut a wide range of materials. Lasers are specialists at cutting shapes in thin sheets of metal. Laser cutting is the nicer brother of both flame cutting and plasma cutting—it is more accurate than they are, and its heat affected zone is not as bad. If the cut job is suitable for a laser, there is a good chance that it is a better option than waterjet cutting because the price is usually lower.

Despite its refinement, laser cutting still has the bad manners of the thermal cutting family. Warping and distortion are still an issue. It tends to be a bit awkward for cutting acute inside corners because its heat can blow out the corner, and intricate cutting can cause overheating in small areas. Lasers are also hindered in cutting reflective metals such as aluminum and copper, although modern fiber lasers can do it. Because of the optical component of the laser cut, a low-quality surface on the material makes an inconsistent cut. All of these limitations do not apply to waterjet cutting. Lasers also make smoke, which can be especially noxious when cutting plastics or composites. Waterjets don’t smoke.

Well-run waterjets cut more accurately than lasers in most conditions. This is especially true in plate thicknesses over 3/8” and in larger part sizes where the thermal expansion of the material from the laser’s energy compromises the accuracy of the parts. A part that was cut to the correct size while it was hot will shrink as it cools to ambient temperature. Waterjets cut at ambient temperature, eliminating this adverse effect.

Lasers usually cut metals under an inch thick, but waterjets can cut metals over a foot thick, and they do it without a heat-affected zone (HAZ). A laser can cut a hole diameter as small as about 75% of the thickness of the plate, but waterjets can cut a hole diameter that is 20% of the thickness of the plate. Finally, waterjets excel at cutting very thin sheets because the sheets can be stacked without compromising quality.

Let’s compare the cut surface of a laser cut versus a waterjet cut. A laser cut usually feels smooth and has a glossy appearance, but this isn’t always a good thing because this smoothness is due to the melting of the cut face. The metal at the surface can be hardened and cracked from the heat. In contrast, a waterjet cut has a satin finish because the cut face is pristine, raw metal. A waterjet cut can be rougher than a laser cut due to the vertical striations. The severity of these striations is tied to the cutting speed, so reducing the cut speed makes a smoother cut.

A disadvantage of laser cutting in plate thicknesses of 1/4” or more is that the cuts can have a wavy cross-section, as well as one or two degrees of taper. However, waterjets with taper compensation can produce true 90° cut faces. This accuracy can be demonstrated by standing a waterjet-cut part on its edge.

However, the laser industry is much bigger than the waterjet industry because lasers are good at cutting sheet metal parts for less money and still meeting acceptable quality standards. 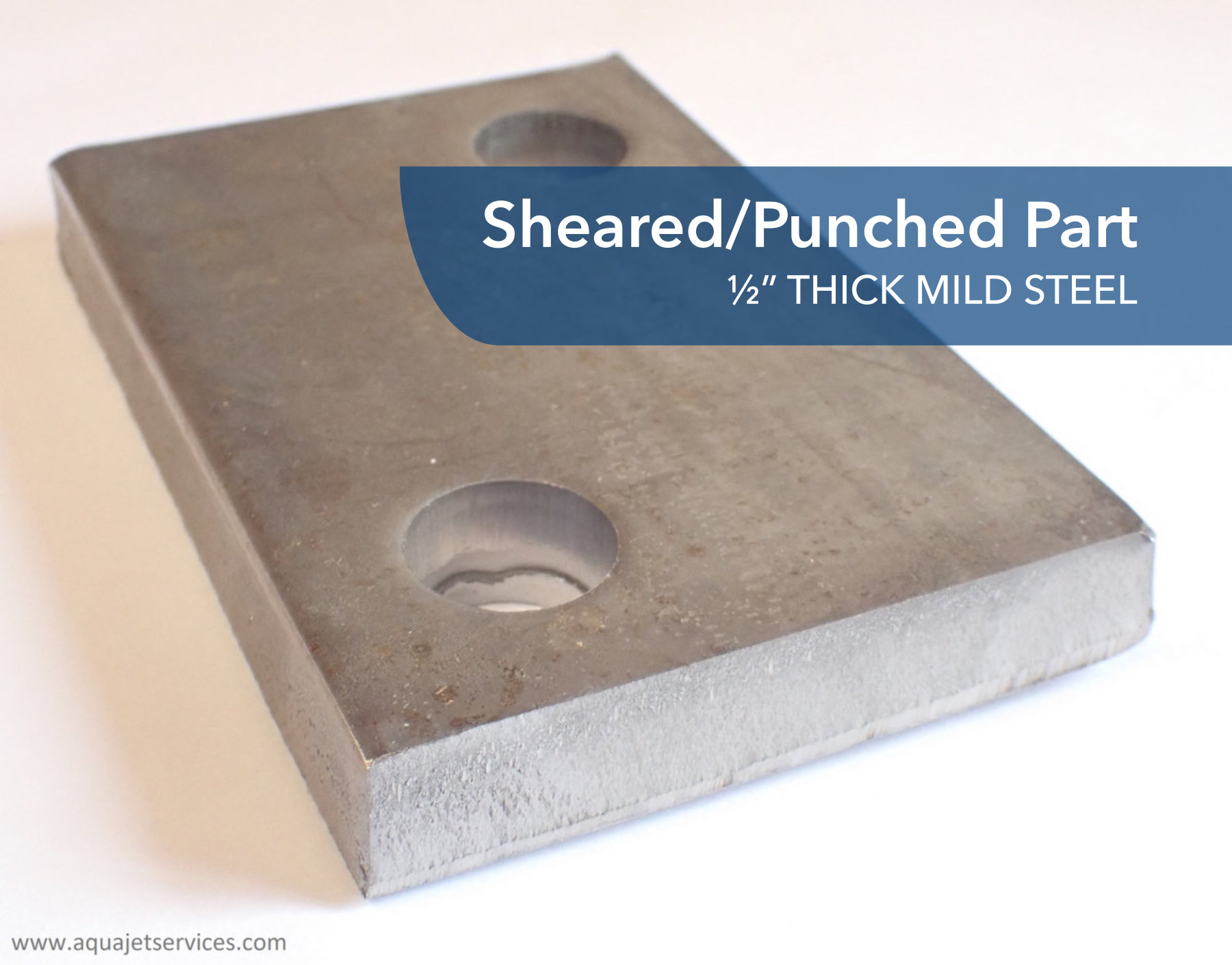 Punching is a mechanical cutting method that uses a punch and die set to shear the metal. Nothing beats the price per part of punching or shearing in mass production. However, setup can be extremely expensive for punching custom parts. An advantage of mechanical cutting methods like punching is that they do not leave a heat-affected zone. They also can produce consistent part dimensions.

A disadvantage of punching is that the shearing action distorts the cut face and the top and bottom surfaces. The minimum diameter of a punched hole in steel is 1.5 times greater than the thickness of the plate, but waterjets can cut hole diameters that are 5 times less than the thickness of the plate. Finally, hard metals cannot be punched, whereas waterjets are a natural fit for cutting hard metals. Waterjet cutting rarely competes directly with punching or shearing because laser cutting is usually situated between them. 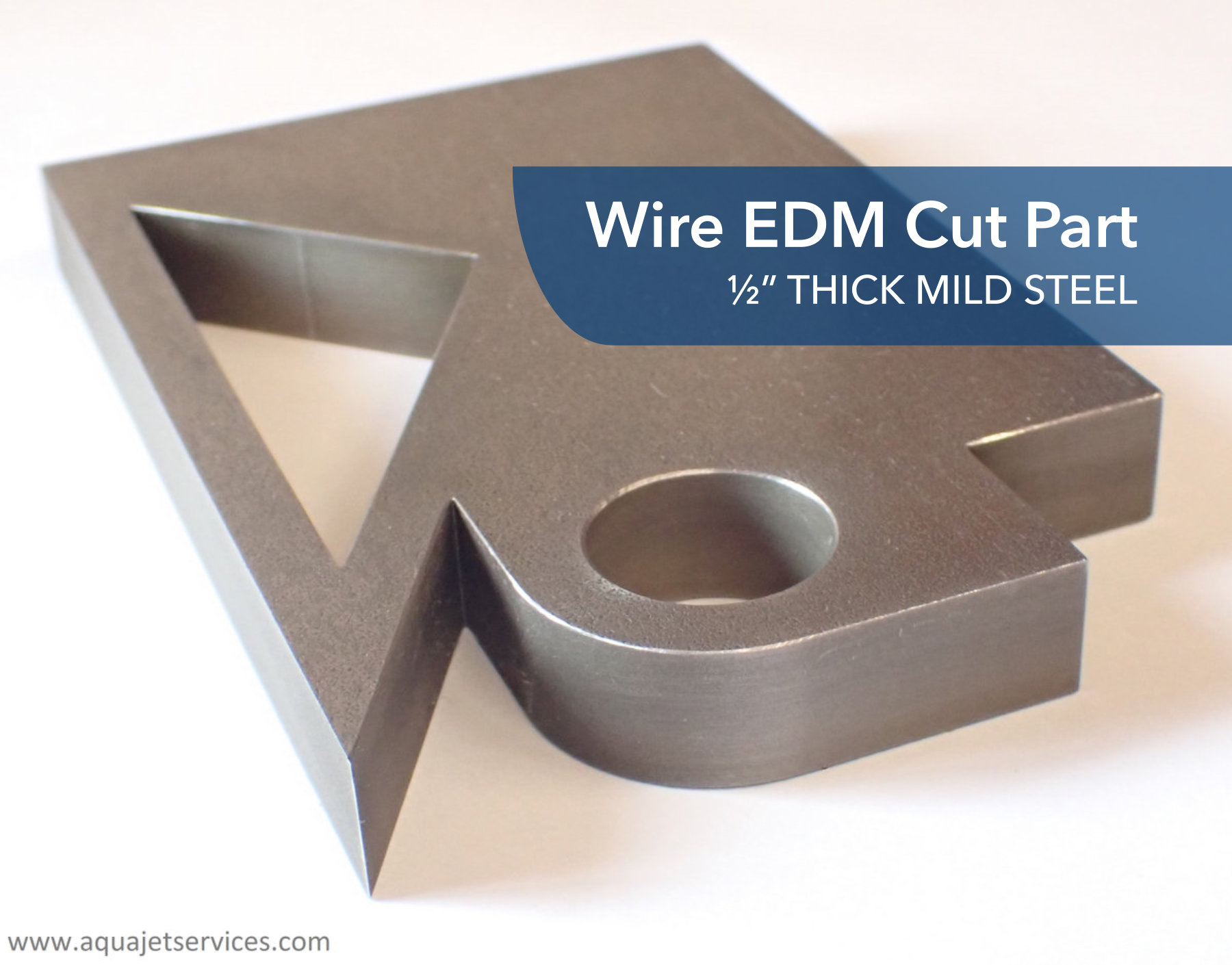 Wire EDM (Electrical Discharge Machining) uses an electrically charged wire that is spooled through the material being cut. Both the workpiece and the charged wire are submerged in a dielectric fluid, and the electrical discharge does the cutting. Wire EDM is a premium cutting method that is slower and more accurate than waterjet cutting, meeting tolerances within tenths of a thousandth of an inch.

Wire EDM cutting works well in thick metals. It doesn’t produce significant residual mechanical stresses, nor does it make a serious heat-affected zone. In these ways, it is comparable to waterjet cutting. Wire EDM is also good at cutting hard metals. Commonly, it is more expensive and better quality than waterjet cutting. 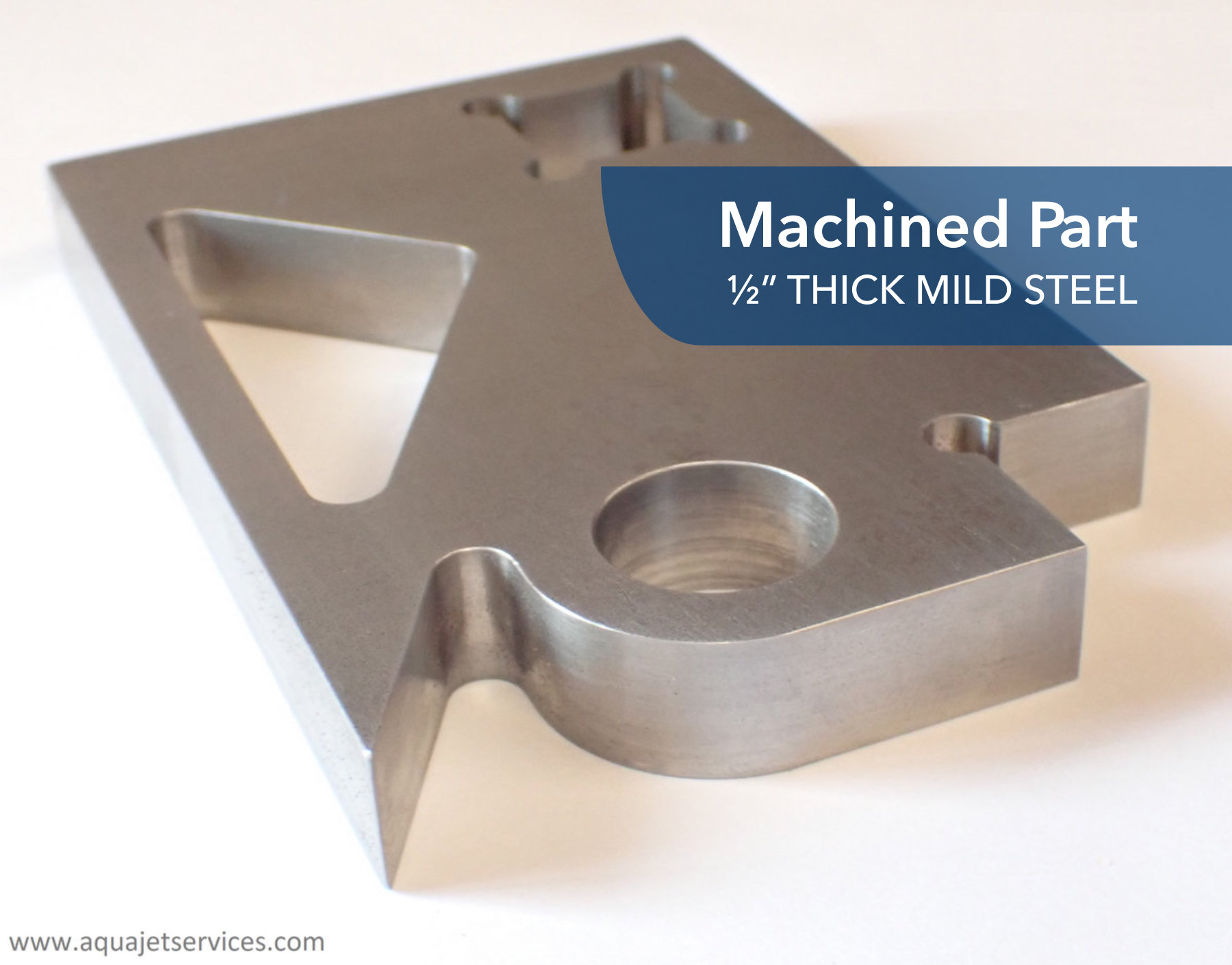 Milling machines mechanically cut away material to shape the desired part. Machining is not exactly an alternative to waterjet cutting; rather, the two methods complement each other, often participating in the manufacturing of the same parts. Machining is slower, more accurate, and generally more expensive than waterjet cutting. Machining can produce parts that are accurate within a tenth of a thousandth of an inch, and it can yield high-quality surface finishes.

Machining also permits the cutting of blind holes and milled pockets, whereas a waterjet has to cut right through the material. However, milling machines must reduce all scrap to chips, consuming time and energy, but a waterjet can simply cut away the scrap in one pass.

Waterjet cutting complements machining by accurately cutting profiles with the option of leaving a small amount of extra material on faces that require finish machining. Because waterjets can cut material over a foot thick, they can save a lot of machining time by roughing out the shapes of large machined parts.

The face of a waterjet cut is pristine and unstressed metal, so the machinist’s cutters do not have to break through hardened metal during the finishing machining. In contrast, all thermal cutting methods harden the metal at the cut surface. That is why the best friend of the milling machine is the waterjet.