Each waterjet pressure/power configuration has its own strengths and weaknesses. As we all know, salespeople only talk about the strengths of their waterjet’s setup, and they might accidentally overshoot the facts a bit. But the buyer wants to see the whole picture. This topic is controversial, but we can make intelligent choices by being informed.

Before we get into waterjet pump pressure and power ratings, we need to look at the jet setup in the cutting head. The orifice in the cutting head is the output from the high-pressure system, and the pump is the input. Therefore, the size of the orifice is determined by the pressure and power of the pump. The pump/orifice combination has a given water flow rate, which in turn determines the abrasive flow rate and the size of the mixing tube, or waterjet nozzle. So you see that the pump specs determine the whole jet setup. Charts containing the optimal configuration for each waterjet are published by the waterjet manufacturers. 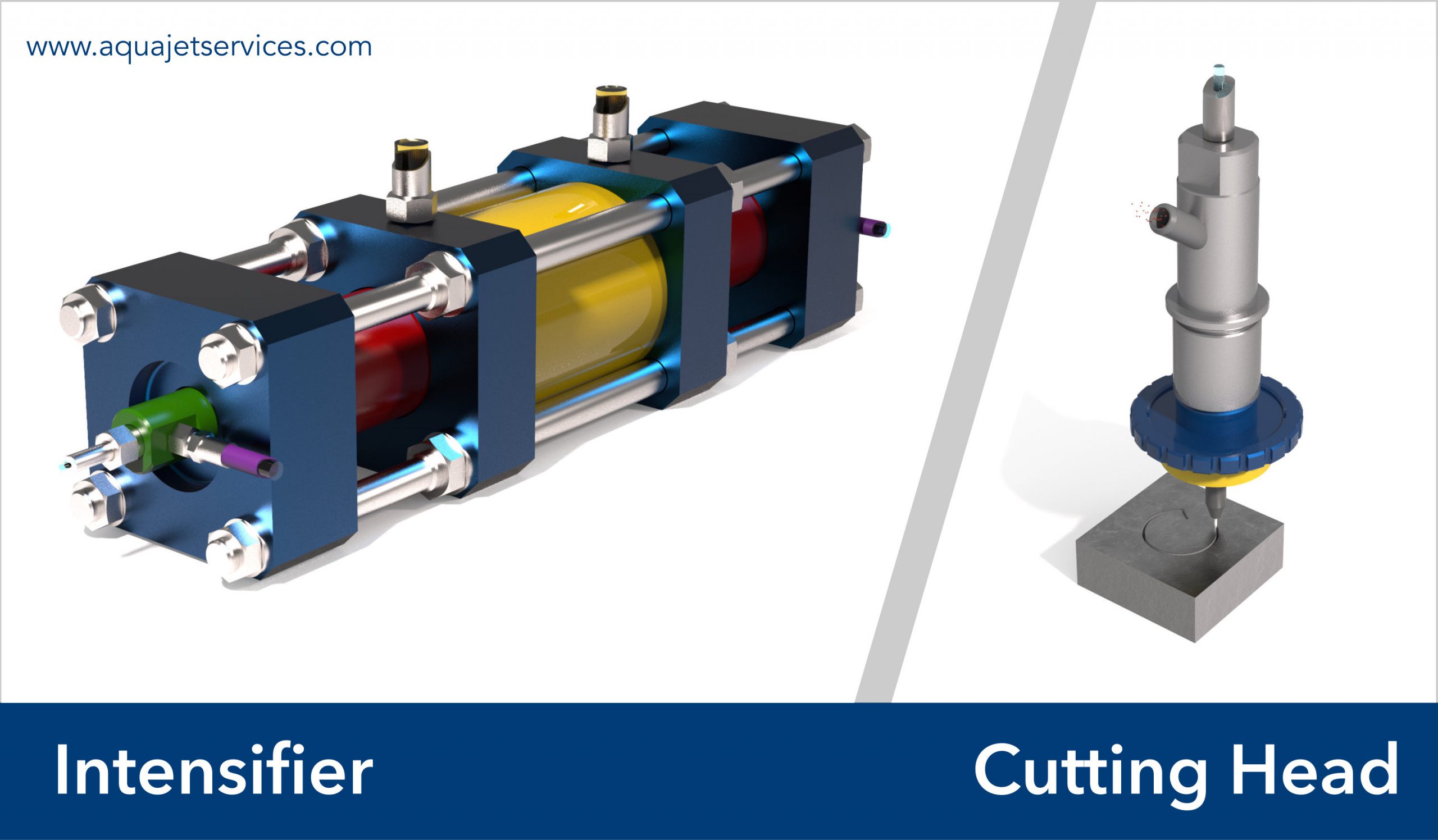 On a waterjet, the specs of the pump determine the setup of the cutting head.

Although these configurations can be tweaked for specialized conditions, the waterjet will be close to optimal performance when configured according to factory recommendations. It is easy to downsize the whole configuration to a lower setting on the chart for cutting fine geometry or for optimizing cost inputs on jobs that don’t utilize the full power of the stream. (For example, a high-power stream is not needed when cutting intricate geometry in thin sheets. This is because the cutting head is continually accelerating or decelerating without reaching its cruising speed.)

We just mentioned two factors in waterjet cutting—the cutting speed and the abrasive usage per length of cut (We’ll refer to it as the abrasive efficiency). The graph below shows the ratios that make up the operating expense of a waterjet. We see that the garnet abrasive is the single largest operating expense. We also see that operator labor and shop overhead can be combined as fixed hourly expenses that will not change depending on the waterjet. These fixed hourly expenses can be reduced directly through faster cutting speeds. That is why the two most important cost factors are abrasive efficiency and cutting speed—they directly impact more than 2/3 of the total expenses in waterjet cutting. We will continue to focus on these two factors in the following paragraphs. 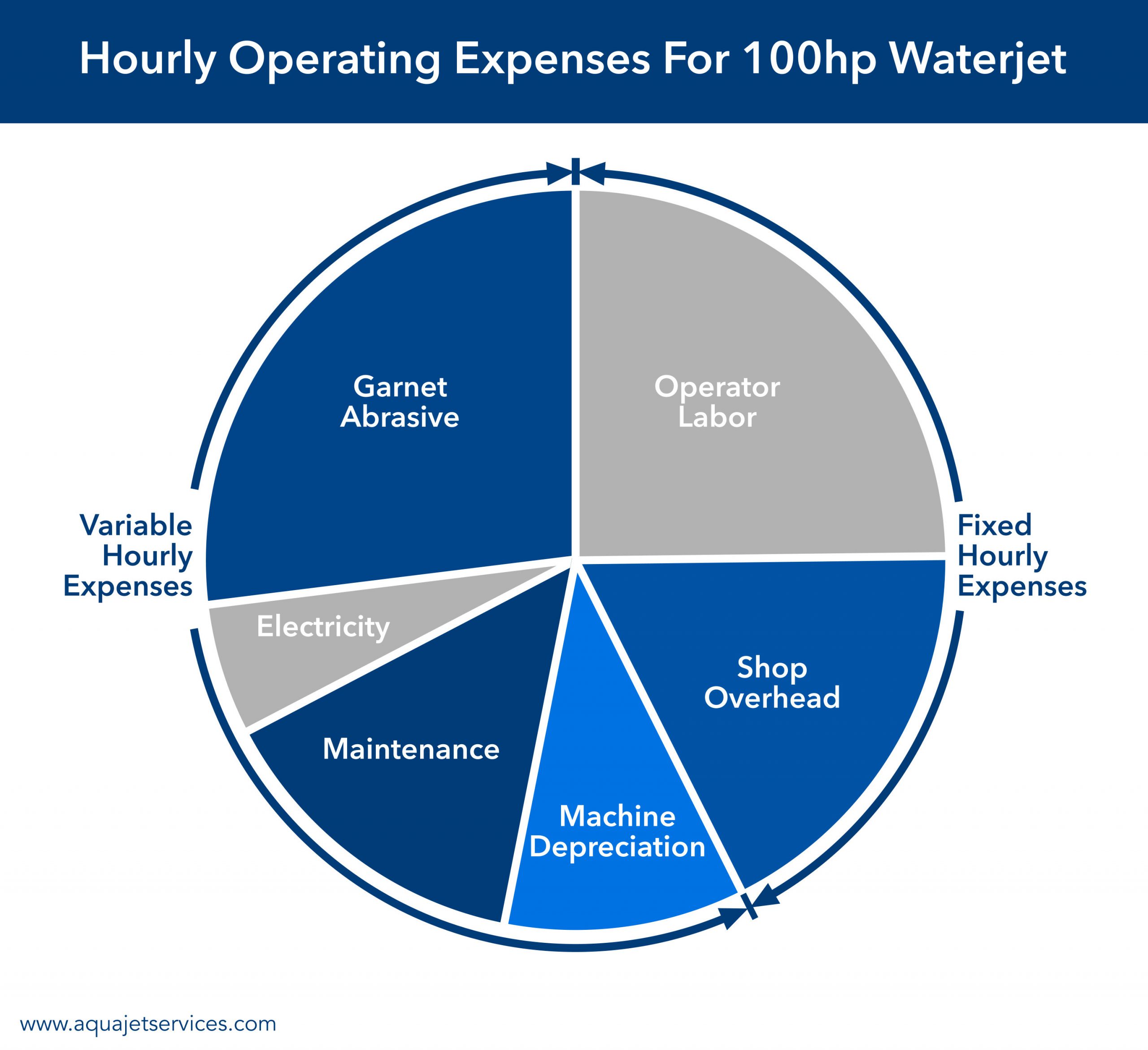 Pie graph showing the main components of the hourly operating expenses of a waterjet.

The Relationship Between Waterjet Pump Pressure and Power

Here we will discuss the pressure side of the equation in more detail, and then we will move on to the power side. 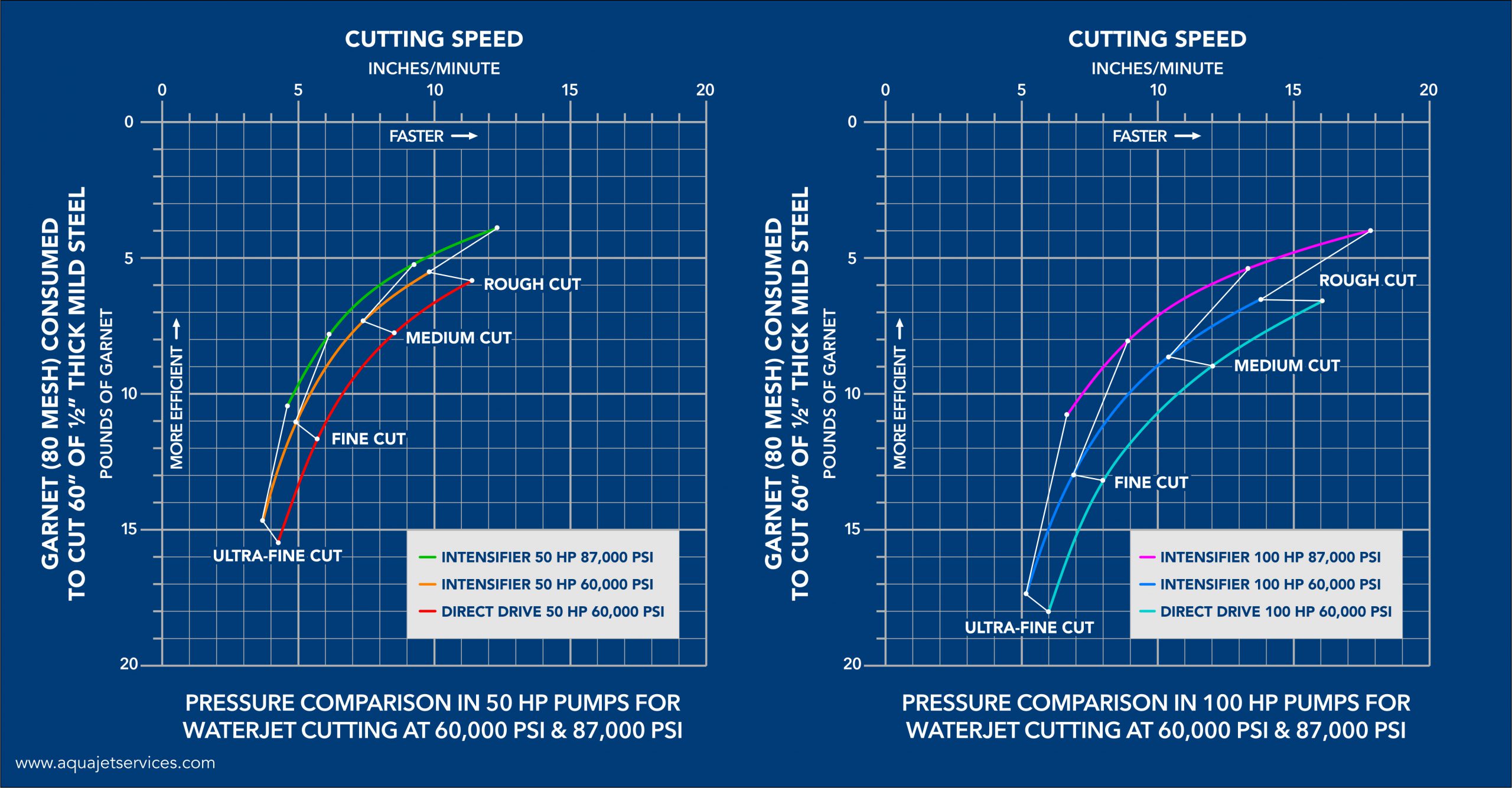 Graph comparing the cutting performance of various pressure levels in 50 hp pumps and in 100 hp pumps.

Now we will discuss the power side of the equation.

Let’s compare two waterjet cutting systems of the same pressure but different power levels—a 50 horsepower system and a 100 horsepower system. See graph below. The 100 hp pump can cut faster. It produces more gallons per minute of water, which means it runs a bigger orifice and bigger waterjet nozzle. Its wider cut requires it to remove more material. It also uses more abrasive per minute to cut faster. The abrasive usage per foot of cut can stay about the same, although the high-horsepower pumps tend to be configured to run a bit more abrasive than optimum to take advantage of their greater cutting speed. 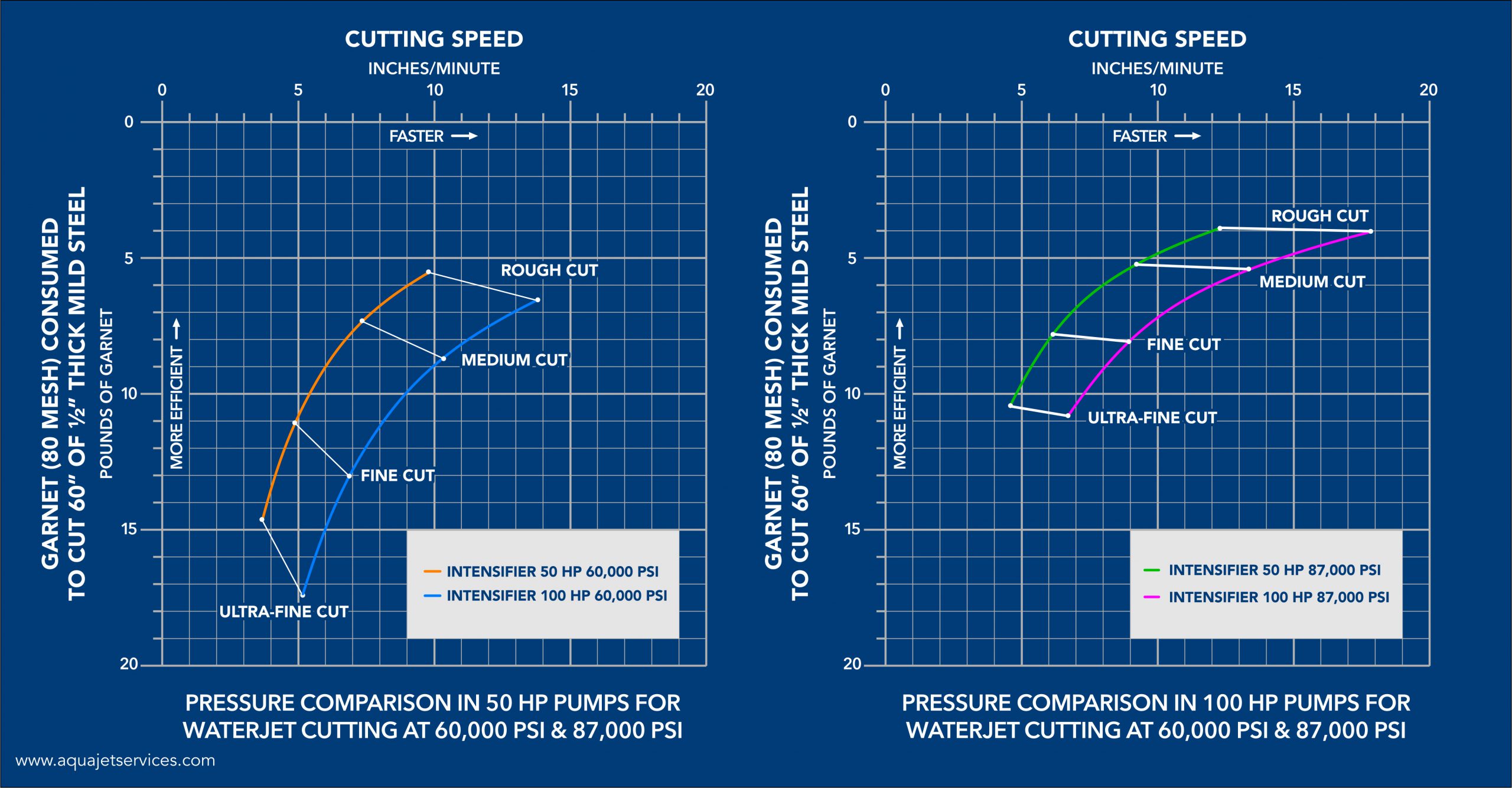 Remember that cut speed is driven by either pressure or power, but abrasive efficiency is only driven by pressure.

To Wrap Up the Waterjet Pressure Controversy 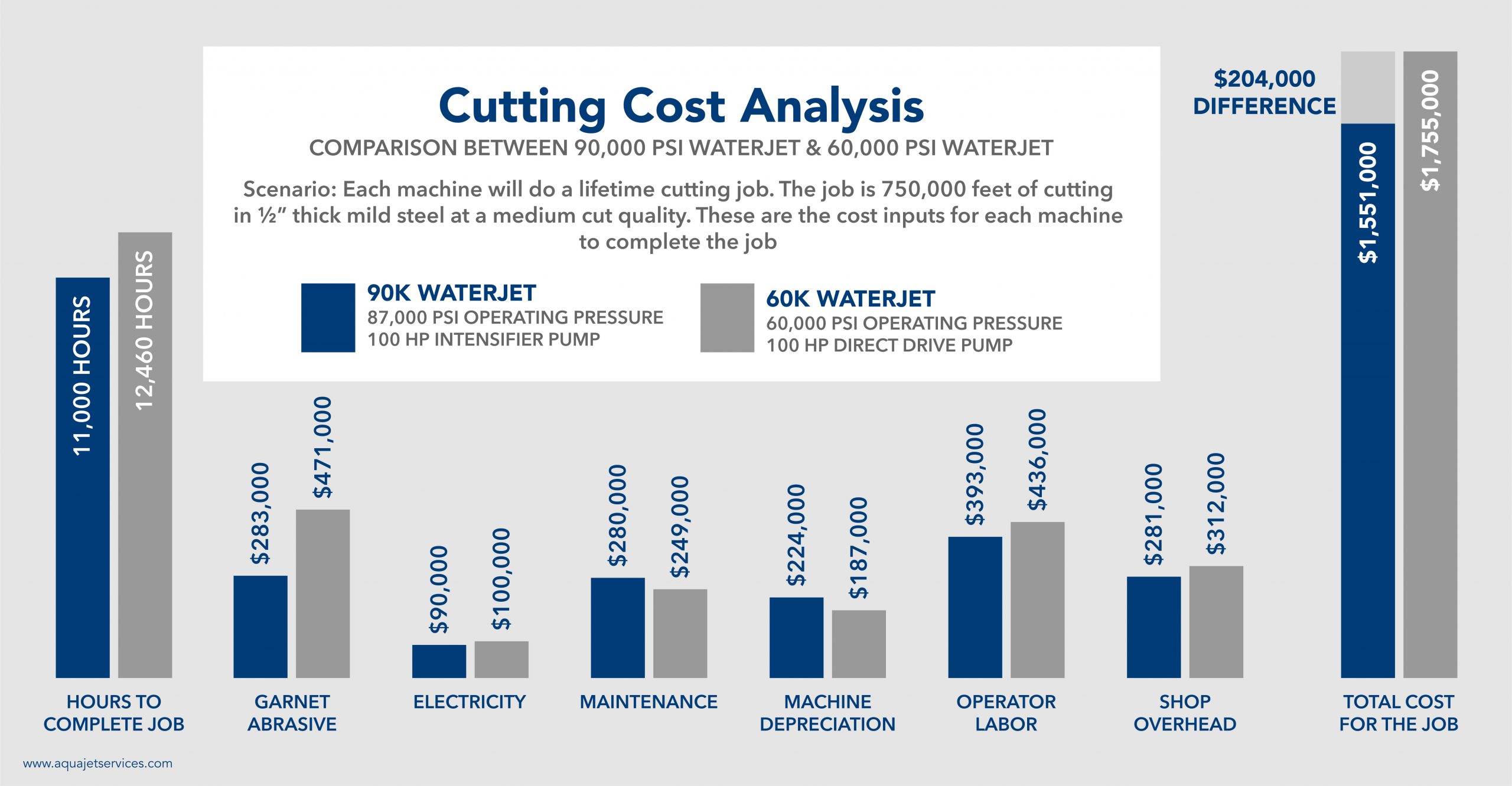 This topic can get interesting when hearing the sales talk from waterjet manufacturers that do not offer 90,000 psi systems. It is crucial for the buyer to keep a firm grip on both the abrasive efficiency and the cutting speed. With a good handle on those two inputs, all other inputs can be kept in proper perspective. For example, the seller of 60,000 psi waterjets can honestly claim to cut at the same speed as 90,000 psi systems, while forgetting to mention that they consume far more abrasive per foot to cut that fast. Or else they can say that they use the same amount of abrasive per foot while being quiet about the fact that they would take much longer to cut that efficiently. Don’t let anybody tell you that you can lower one end of this seesaw without raising the other end.

Sometimes the seller wants to focus on comparatively negligible factors like electricity usage while papering over the big factors like abrasive usage.

Finally, let’s remember that smaller machines have their own strengths—they can be more cost-effective in intricate cutting where a high-power cutting stream cannot be fully utilized. Also, the lower purchase price of a smaller system is attractive if the machine will only be used part-time, permitting longer process times. Because each system has its own merits, some waterjet manufacturers offer the whole range of pressure and power configurations. They can offer informed assistance to help the customer choose the best system for their application.

Previous
Continue to Comparison Between Waterjet Cutting and Other Cutting Methods