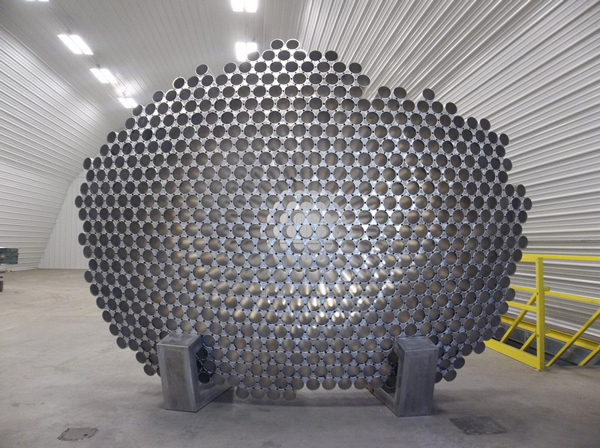 This unique art sculpture by Emil Lukas was built right here in our shop. The sculpture is 8’-9” tall x 12’ wide, and contains over 600 aluminum tubes. The tubes are touching in the back of the sculpture and spaced apart in the front with waterjet cut spacers, which forces the tubes into a spherical arrangement. The result is basically a very large lens which produces some incredible optical effects.

From the front, the sculpture is an opaque spherical wall with only a small cluster of tubes that you can see through. This cluster is like an eye that follows you around as you move and which grows or shrinks depending upon your proximity to the sculpture. 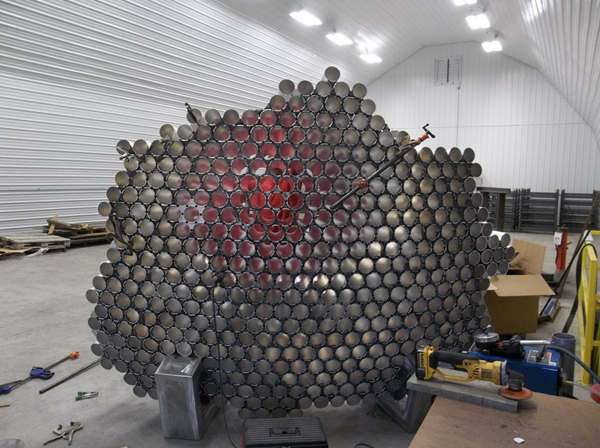 The opposite side of the sculpture provides an entirely different effect. The spherical arrangement of the tubes means that there is a point where the centerlines of all the tubes converge — the focal point of the lens. At this point, you can see through all of the tubes, and the sculpture becomes almost invisible.

As you move away from the focal point, your view once again is obstructed by the tubes but is replaced by other spectacular effects created by light passing through the tubes’ reflective interior. In this photo, you can distinguish the image of a person on the other side even though the person is partially hidden. 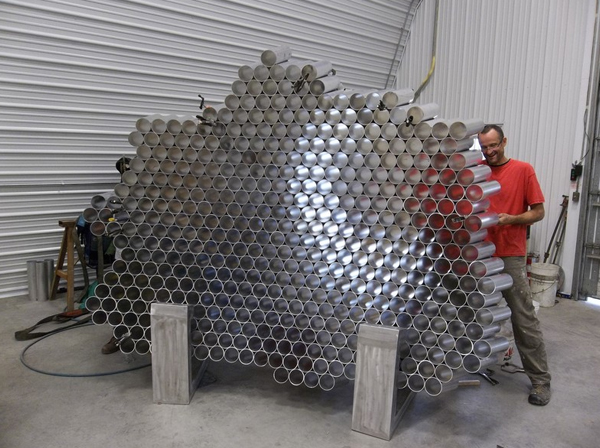 The guy in the red shirt is the artist, and the other guy is Jessiah (an employee of AquaJet).

Check out this short video of the tube sculpture being built, and pay special attention to the sparks falling down on the far side of the tubes. You don’t actually see the sparks, but wherever a spark goes past a tube, it lights up the entire tube, creating a beautiful cascade of colored lights!

Emil had been working at developing this type of sculpture before he ever knew about us. When he first contacted us, he had already built several large prototypes out of cardboard tubes and was ready to take it to the next level. He built the first aluminum version in his own shop. Initially, our only involvement was waterjet cutting the tube spacers, but we ended up also fabricating the bases, as well as using our 3D software to aid in the design of the sculpture.

Shortly after Emil finished up the first sculpture, he decided to start on the second one, but this time he wanted us to build it. We didn’t build it entirely on our own, of course. As the artist, it was Emil’s job to determine the placement of the tubes, especially as the sculpture neared completion. The job went exceptionally well, and Emil is already busy dreaming up future projects to do together.

It was definitely a pleasure working with Emil, and we very much look forward to working with him in the future.